Storytelling that Gives a Voice to Forgotten Heroes

Klandestine Man is the story of a man who risked his own life for what he believed, a man who changed history and a man who’s not too modest to tell you why.

Born a privileged white southerner, young Kennedy could not ignore the bigotry and intolerance around him. Parlaying his patrician roots, he wheedled his way into the inner circle of the Ku Klux Klan and went undercover, using an alias to expose the true identities of its leaders, feeding information to the producers of the highly popular Superman radio show, who found in the Klan an ideal enemy for their hero.

In his prime, Stetson Kennedy was a marked man with a price on his head. His harrowing story of the adventures that led up to that, as he infiltrated and helped to ultimately destroy the sinister Klan empire, is told in his book, The Klan Unmasked. A sensation overseas when it was released in the 1950s, it wasn’t until 40 years later that the book was finally published in the U.S.

Klandestine Man offers a view into the brighter aspect of Kennedy’s life, as well: the role that music played, from his early days conducting field recordings of Florida folklore with Zora Neale Hurston, to his long-lasting friendships with Woody Guthrie and Alan Lomax. The film’s soundtrack will include archival recordings preserved by Kennedy, tunes written about him, and songs performed by a generation of recording artists inspired by his “radical” ideas of justice and equality.

Prolific author, crusading journalist, tireless activist, early environmentalist and chronic womanizer, Kennedy was a wild human specimen, not above embellishment or self-promotion, but his courage, his actions and his accomplishments made him a legend. Hailed by the likes of Dr. Martin Luther King, Jr. and Hillary Clinton, the famed oral historian Studs Terkel put it best when he said: “With half a dozen Stetson Kennedys, we can transform our society into one of truth, grace and beauty…”

Klandestine Man is his story. The film is currently in production. 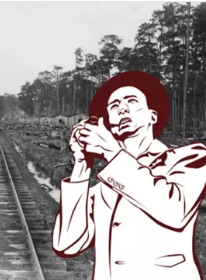 "I always said that my last words would be my most militant." Stetson Kennedy   Klandestine Man